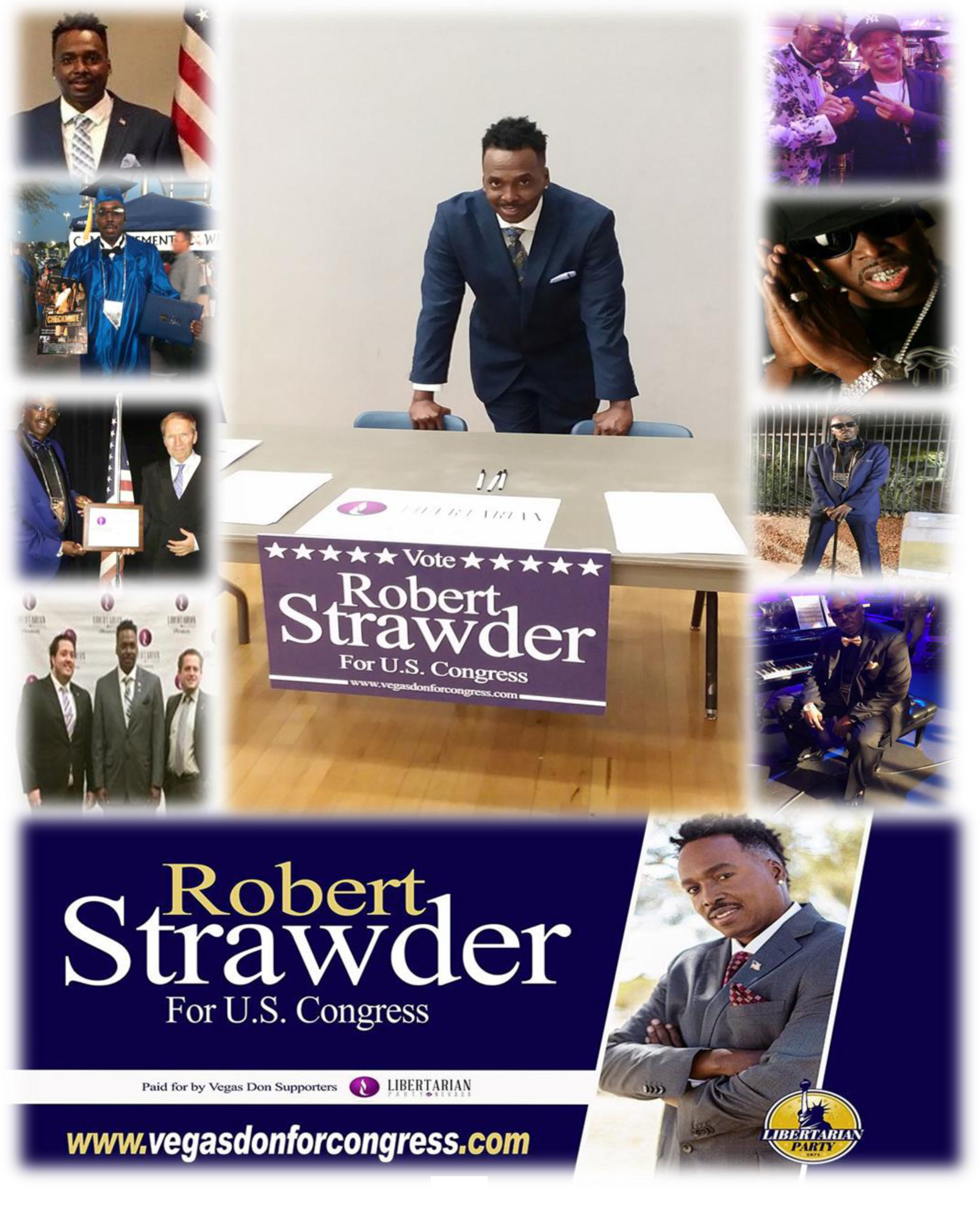 The Libertarian Party of Las Vegas Nevada is proud to announce we are in the process of creating a new movement within our political party, called “Hip-Hop Meets Politics” which is being led by Robert Strawder aka “Tha Vegas Don” Our vision is to infuse the Libertarian Party’s political moral beliefs, principals and issues with the powerful voice of the Hip-Hop community. By collaborating the Hip-Hop community mixed with a political agenda we’re hoping to spark a new vibrant younger generation of voters at the poll. Our mission is to bring the Libertarian Party to the forefront as an optional voting party other than the two party systems of Republicans / Democrats. We know the principals in which the Libertarian Party was established on truly reflects the heart and the minds of “We The People” a principal that’s based on Liberty, Justice, Equality and Freedom for everyone. Our mission is by the year 2020 the Libertarian Party will revive communities all across the Nation to understand “We are The People” our constitution was found on and if we want change then “We The People” have to make that change and that change will start by us and it will be truly for us.

WHO ARE THE LIBERTARIANS

The Libertarian Party is a political party conceived by a small group of people in the home of David F. Nolan in 1971 and the political party was actually formed and established into a political party by December 11, 1971 in the state of Colorado Springs, in the United States of America that promotes:

The Libertarian Party is proud to introduce our candidate Robert Strawder who also goes by his stage name in the Hip-Hop community as “Tha Vegas Don”. Robert Strawder developed his understanding of social issues at a very early age. Robert was born in the city of Los Angeles, California September 17, 1968 then his mother relocated him and his 3 siblings to North Las Vegas, Nevada by the age of two. The crack epidemic and War on Drugs tore Robert’s family apart, as he found himself the head of household at 16 year old. Robert became a statistic as many young black males in our urban communities who get caught in the ugly web of survival but labeled in our justice system as criminal. Robert lived by first-hand experience the life of being caught up in drug war in order to support his younger siblings, and other criminal activities which took years of hard work to escape. The War on Drugs and the federal government’s failed

programs turned North Las Vegas and many other urban projects and neighbor hoods into a poverty war zone.

Robert Van Strawder eventually began to realize through his own experiences and the trials of other friends and family members he was heading down a spiraling path of no return. He knew his fate would soon be sealed to a life of death or incarceration. Therefore, he made a drastic decision to strive towards a positive change and with that change he became a well- known Las Vegas rap artist, then entrepreneur, film maker, and community activist by running to represent Nevada’s 1st Congressional District. Strawder is a walking success story who aspires not only to fight corrupt politicians, but to broadly change urban culture to improve lives starting in his home of Las Vegas, Nevada but hoping to inspire people all over the Country.

After entering the hip hop music scene, Strawder (a.k.a. Tha Vegas Don) got his break at a celebrity lineup shows in Reno when he was noticed by Digital Underground founder Shock G. Under Shock G’s mentorship, Strawder built his own record label, D-Blocc, which was one of the most successful independent record labels on the west coast. He’s also credited for bringing the first hip hop acts to the Las Vegas Strip. His first film, Checkmate: Tha Movie debuted in 2017 at the Las Vegas Black Film Festival.
Robert Van Strawder is also highly active in doing philanthropic work in his community. He works directly with at-risk and high risk youth who are already exposed to gang life, striving to get them out of that life and onto a better path. Often times it requires simple actions like coordinating for kids in rough neighborhoods to get rides to school.
5
These inner city teens listen to him because unlike the administrators/counselors/police officers talking to them on a regular basis, Vegas Don the hip-hop artist came from that pit and climbed out of it. Strawder’s story is the story of America. Anyone can succeed and fail and succeed again.
“That’s why I’m a Libertarian,” Strawder says, “Because I actually found a political party who stands for what most of our people want and that’s freedom, liberty, equality and justice for all humanity. That’s why I want other black, Hispanic and Latino men and women to be Libertarian as well so we can all be liberated under the same moral principles.” Strawder also admits, “I’m not a politician, I am just another concerned citizen willing to become a politician if that’s what I have to do to invoke change.

Opportunity has been created and the Libertarian Party is an opportunity for us all to be liberated truly united here in the United States bringing back the real meaning of “In God We Trust”. Strawder acknowledges success has to be earned and it’s possible for anyone who is willing to endure the long quest.”
His passion project, D-Blocc Records, was highly successful for several years until his major investments were wiped out when the housing bubble burst in 2008. Between the government-fueled economic recession in 2008, the war on drugs’ direct impact on his childhood, and the complete failure of our lawmakers to provide real solutions to America’s worst issues, Robert has had enough.

Robert Van Strawder is running for Congress to hold our leaders accountable. He knows first-hand how government policies hurt working class families every day. In 2018, the Democrats and Republicans won’t be ready for a principled black Libertarian to put them in his sights. “I’ve been listening to the two parties for 40 years,” Strawder says, “I’m done with that.”

We’re asking your support us in this mission of raising 3.5 million dollars to support Robert Strawder in running a successful campaign. We need your urgent participation and assistance in and all ways possible in making this movement a success by 2020. There is no such thing as too little or too much support in doing your part in bringing the people’s voice to the forefront of our American values and beliefs. We have to stop relying on a failing system to bring about a change and we have to be the very change we are looking for and that change will be the change that will propel our children and our children’s children on the path we desire for them to have in the future. You can be a part of this historical change by assisting Robert Strawder and the Libertarian Party to end the cycle of supporting a two party broken system by making the Libertarian Party a major factor in the United States House of Representatives. You can support this movement by: